Todays video is all about the finer points of slip bobber walleye fishing. Slip bobbers are an incredibly affective way to catch walleyes all June long. This video is all about how I find fish and catch them using this technique. I also talk about a lot of the rigging tips and tricks when it comes to walleye fishing with slip bobbers. This will be the last slip bobber video I probably post for awhile so hopefully many of your questions will be answered. As we transition into the summer period how to find and catch these fish will change. Thanks for watching! 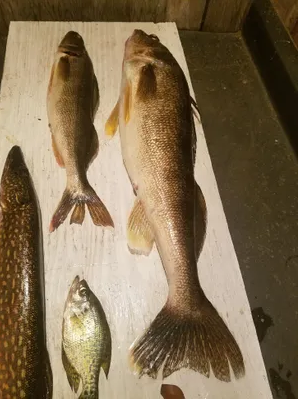 Venturing out alone in the early evening, Van Dyn Hoven pulled his boat into a partial lee of an island in the lake's northeastern lobe and let the breeze drift him toward a 10-foot rocky hole.

It didn't take long to validate his decision to head out.

Casting a big, shallow-diving lure, he had a hit by a solid fish.

"I was targeting northern pike, which my wife and I love to eat," Van Dyn Hoven said. "I wasn't sure what I had, but it was plenty big."

The fish made two strong runs, then Van Dyn Hoven was able to work it to boat side. As he led it into the net, the fish turned and revealed a distinctive white spot on its tail.

"Walleye!" Van Dyn Hoven said. "I was stunned. That spot was as big as a silver dollar."
Although Van Dyn Hoven has been an avid angler since his youth and has caught many hundreds of walleyes, he had never seen one as big as the one he just landed.

He's not alone. In fact, only a handful of anglers have ever caught a Wisconsin walleye as large.

The fish was 31.75 inches long and, when weighed the next day on a digital scale, was 16.87 pounds, according to Van Dyn Hoven.

The fish was a female, mostly or completely spent after spawning, and would have been substantially heavier a few weeks earlier when laden with eggs.

Walleyes stripped for spawning typically yield about 85,000 eggs per fish, said Mike Arrowood, chairman of Walleyes For Tomorrow, and about 5,000 eggs per fluid ounce.
It's not uncommon for an adult walleye to produce 1 pound of eggs.

As such, Van Dyn Hoven's fish could easily have been heavier than 17 pounds, perhaps even 18, and has turned heads and generated discussion about a near miss on the quest to break the state's oldest fish record.

The Wisconsin walleye record is an 18-pound fish caught in 1933 on High Lake in Vilas County, according to the Department of Natural Resources.

Like some other old fish records, doubt has been cast on the legitimacy of Wisconsin's biggest walleye because there is no photo documentation of the fish and its information was presented years after it had been caught, according to the DNR.

Still, it's on the books and is recognized by state officials.

And it arguably makes big fish like Van Dyn Hoven landed in May all the more captivating.

Email ThisBlogThis!Share to TwitterShare to FacebookShare to Pinterest
Labels: Wisconsin


Back to the basics with our twist on traditional summer walleye fishing tactics. These simple tips, tricks will help you catch more fish during the summer months wherever walleye swim!