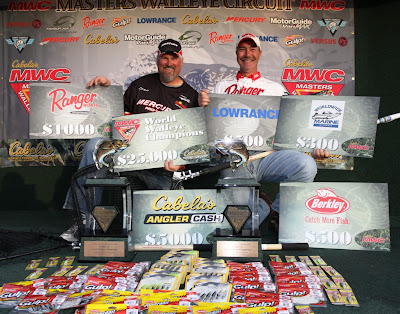 “This is a dream come true,” Kobriger, of Chilton, Wisconsin, said moments after the final weigh-in came to a dramatic close in front of a roaring crowd at the Winneshiek Marina. “It’s going to take awhile to sink in,” added Zwick, of Wrightstown, Wisconsin.

Zwick and Kobriger led the tournament all three days, and were the only boat in the 34-team field to break the 40-pound barrier. The go-to tactic was positioning their Ranger 621 VS over a main-channel break dropping from 10 to 12 feet, where they fished 3/8-ounce jigs tipped with 3-inch, Pearl White Berkley PowerBait Ripple Shad. “Our Lowrance HDS 10 with StructureScan was critical to finding and fishing our top spot—a small point jutting into the channel,” Kobriger noted.

Wyoming anglers Brian Woodward and Rick Walter rocketed from 11th up to second place on the wings of a 20.02-pound Day Three basket, worth $13,000 cash plus the Oxygenator bonus. In all, the field shared more than $110,000 in cash and bonuses. Teams qualified for the no-entry-fee event during the circuit’s 2010 season.

A total of 194 walleyes and saugers weighing 616.07 pounds crossed the Cabela’s MWC stage during the event, which was streamed live on Walleye Central and filmed for airing on the Versus Network later this fall. Big fish of the tournament was an 8.42-pound walleye caught on Day One by 2010 Cabela’s MWC team of the year, Ohioans Mike Knippenberg and Ryan Buddie.

The event was co-hosted by the Prairie du Chien Cabela’s store and Falling Rock Walleye Club. Following each day’s weigh-in, teams trailered to the store to visit with fans in the Fishing Department, and hold a free drawing for Cabela’s gift cards—courtesy of Cabela’s. On Friday, the MWC, Cabela’s and National Professional Anglers Association held a free Youth and Family Fishing Clinic at the MWC tent outside the Cabela’s store. Youngsters received rod-and-reel combos from the NPAA, tackle kits courtesy of Northland Fishing Tackle, and participated in a free drawing for Cabela’s gear. In addition, MWC anglers showed the youngsters how to tie a slip bobber rig, and helped get their new rods ready for fishing.

Walleyes were winners in the equation as well. Since 1984, the MWC Conservation Fund has donated more than $300,000 to fisheries-enhancement projects in states where our tournaments are held. At the Championship, a $15-per-boat donation from each team’s entry fee will benefit efforts to protect the local fishery.